The Feast of the people of Cefalù: the Santissimo Salvatore 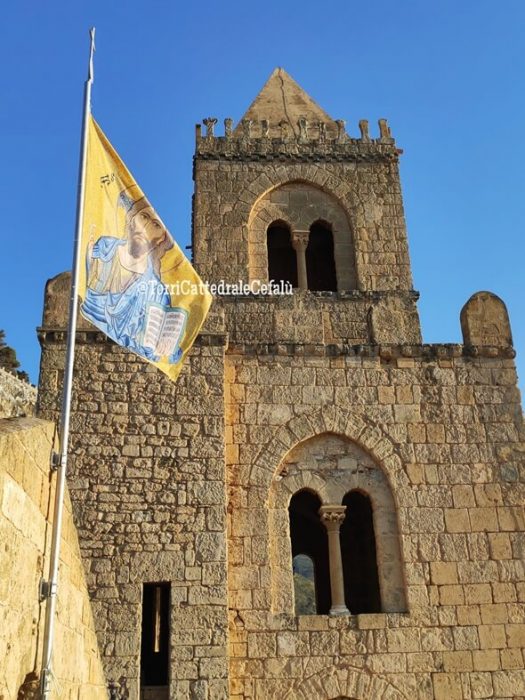 Posted by domenico.laplena on 12 March 2021 | Featured

Every year in Cefalù people anxiously wait for the first hot days of August to celebrate the Santissimo Salvatore, the historical patron saint of the city to whom the Cathedral Basilica is dedicated. The festivities begin on August 2nd with the unfurling of the flag between the towers of the Cathedral, a very important and unmissable event for the local people who see the symbol of tradition and deep faith that binds them to Jesus the Savior; The Square will be very crowded.

The feast takes place on 4, 5 and 6 August, when it ends with the Solemn Procession.

The origins of this feast are very ancient and are rooted in the Gospel story of the Transfiguration of the Lord, when Jesus revealed himself to the disciples Peter, James and John, as the Body of the true Man and true God, changing his appearance in an extraordinary splendor of the person and in the amazing whiteness of his clothes.

The history of Cefalù has always been connected to the myth of Gesù Salvatore, living with it and basing its historical, religious and cultural identity on an indissoluble bond.

The cult of Jesus Savior finds the first strong link in the construction of the Cathedral of the Transfiguration, inside which is the great mosaic of Christ Pantocrator, Christ dressed in Light.

The Cathedral was built by King Roger II in 1131. According to legend, Roger was sailing to reach the coast of Sicily when a terrible storm broke out. On this occasion he made a vow to Jesus Savior promising him the construction of a great temple in his honor if he had touched land safe and sound. Roger’s ship landed in Cefalù, and it is here that stands, even today, the symbol of the city, heritage of humanity, known throughout the world for its priceless architectural beauty.

The first signs of the celebrations of the Santissimo Salvatore in Cefalù date back to 1159 in an ancient parchment signed by the antivescovo Daniele.

Other events that bind the people of Cefalù to Gesù Salvatore are the earthquake of February 5, 1783, because of which much of Sicily and Calabria suffered serious damage and had many victims and Cefalù miraculously emerged unscathed from the tragic event, thanks to the protection of Gesù Salvatore; and the cholera epidemics that affected the city in 1837, 1854 and 1911 for which a church was built and every year on July 2 we celebrate the Santissimo Salvatore at the Tower, or “Little Salvatore”, in thanksgiving for his protection to the people.

In the late afternoon of August 6, the last day of the festival, the solemn procession takes place with the loved statue of Gesù Salvatore who, with his arms raised to the sky, seems to hug the crowd, among the lights of the illuminations, the popular songs, the religious litanies, the thousand pattering footsteps and the scent of incense that mixes with the warm atmosphere of the evening.

Gesù Salvatore is carried on the shoulders of more than 10 men through the streets of the whole city; the faithful in the streets, looking out of balconies or windows will watch him with devotion, sending kisses and whispering prayers.

Want to visit the Cathedral? Plan your visit now!
Discover our itineraries
Tags: Informations, Itineraries, Visiting
Comments are closed.
We use cookies to make sure you have the best experience on our site. If you continue to use this site we'll assume that you're happy with it.OkPrivacy policy