The Mosaics: art and emotion 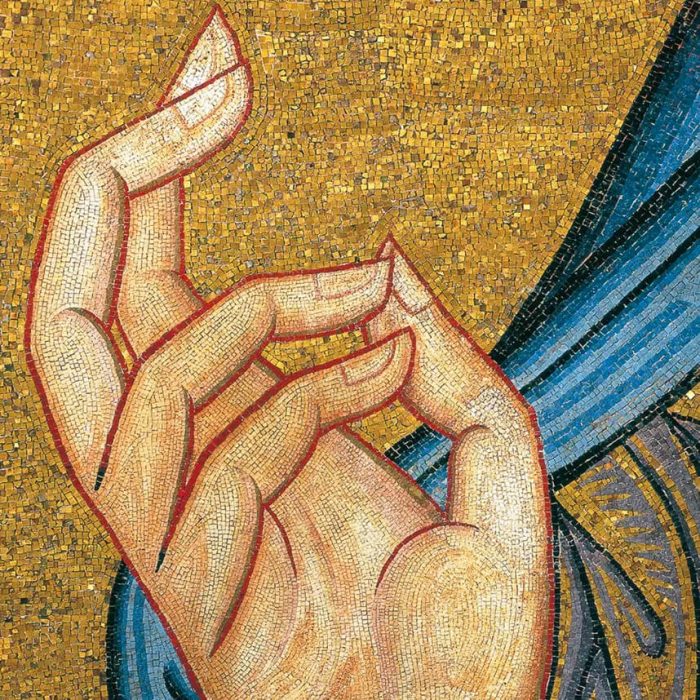 Posted by domenico.laplena on 12 April 2020 | Featured

The visitor who enters into the cathedral is immediately attracted by the Mosaic of Christ Pantocrator that stands out in the apse basin. A triumphal arch borders the frontal mosaic decorations of the presbytery.

The mosaics cover a total surface of about 650m² and were made at different times.

The oldest are those of the apse and the cross made in 1148 by byzantine masters from Constantinople called by king Roger II. The mosaics on the walls were probably made between 1154 and 1166.

The magnificent mosaic of Christ Pantocrator illuminates the presbytery with its golden tiles; various figures of evangelists and apostles are arranged below, according to a hierarchical liturgical arrangement.

In the section below, the praying Virgin is the central figure, at her sides are the Archangels Michele, Gabriele, Uriele and Raffaele;

Following in the section below the Saints Pietro and Paolo and the evangelists Marco, Matteo, Giovanni and Luca; Closing the hierarchy the apostles Filippo, Giacomo, Andrea, Simone, Bartolomeo e Tommaso.

Each of the figures is identified by an inscription with its name, in greek and latin.

On the walls of the presbytery, figures of Saints and Prophets appear aligned along four overlapping sections; in the cross vault are represented Angels and Seraphim.

The colors of the clothes of Christ Pantocrator aren’t accidental but communicate a specific meaning. He is King, Priest and Prophet. His kingship is indicated by the jeweled nimbus behind his head, his being a priest is indicated by the green stole on his right shoulder. As the holder of the dual nature of the divine and human, He has a red vestment lighted in gold symbolizing the divine nature and a blue cloak symbolizing His humanity.

“I became man, Creator of man and Redeemer of my creature

I judge bodies as Man, hearts as God”

In opposition to the Son, the chromaticity of the clothes emphasizes the humanity of the Virgin who wears a blue dress, invested by the grace of God with the red cloak.

Finally, Christ is Prophet because He keeps the book open, He is the only one who can speak!

while apostles and saints, in front of Him, show in their hands the books closed.

The right hand indicates with the three joined fingers the Unity and the Trinity of God, and with the two raised fingers, the double nature, human and divine, of Christ.

He is not a blessing Christ, but with the characteristic byzantine gesture he exhorts us to be silent, because He is the only one who can speak, showing us in his other hand the book of the Gospels opened on the page of John 8, 12 where it is written, in greek and latin:

“I am the light of the world,

Want to watch the mosaics up close? Save time!
Discover our itineraries
Tags: Architecture, Informations, Itineraries, Visiting
Comments are closed.